BEER.INSIDE Draft&Craft
The story of this pub began with a great love for beer of two friends. In 2017, they had the idea to open their own special craft beer pub, because there was no such craft in Mykolayiv before. 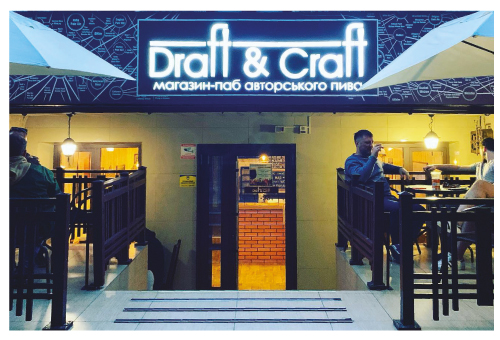 Later, the guys began to realize their plan: they bought the premises, installed professional equipment from an Italian manufacturer. They are especially proud of their modern cold room and universal taps for pouring beer – fast beer. Cleanliness is also important for the establishment, so Spulboy was purchased for washing glasses, and the sanitation of the bottling system is carried out strictly on schedule.

In May 2018, the Draft & Craft pub-shop started operating in test mode. Initially, 5 taps out of 20 available were launched here, but today Ukrainian breweries are queuing up to start cooperation with this pub. However, before getting on tap, breweries are inspected. The owners, together with Antappers and Birgics, who are popular in the city, organize a tasting, taste new products, put their own assessment in Untappd, and then decide whether consumers will get this beer.

Currently, Draft & Craft has a wide range of craft beer: 20 tap taps and about 40 types of bottled beer. Among all the variety, 5-6 taps are assigned to permanent varieties, and the rest of the owners are constantly updating and surprising consumers with new beer experiments. Among the permanent partners of the breweries: FDB, Father’s Brewery, Copper Head, KF Brewery, Hoppy Hog, Дудляр, Дідько, Ten Mеn, New Craft Story by Viktor Vaschuk, Kumpel Group, Mechanic, Rock Dog, ReBrew.

The establishment positions itself as a taproom. Draft & Craft philosophy: “Friends, come in, taste 20 different beers, choose your favorite and don’t forget to take a bottle with you!”. Tastings are arranged for everyone here, during which 4 different beers are tasted. The pub does not have its own kitchen, but consumers will be offered the most popular snacks and snacks for beer.

The pub often hosts tasting evenings, or meetings with famous brewers who are happy to share their experiences, introduce the audience to new beers, or talk about the wisdom of food pairing. The pub is also a regular participant in beer festivals.

Draft & Craft together with IIIO Brewery conducted a collaborative cooking, in which they welded Hazy Sour IRA. This variety can be tasted in the end of November. 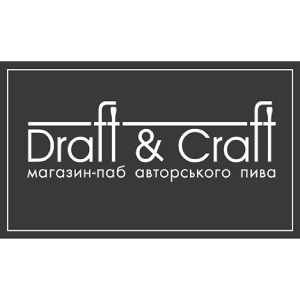