BEER.INSIDE Dva Pyvovara
This small craft brewery is located in Odessa. Beer brewing here began in 2017, when the future owners of the brewery mastered brewing beer on home equipment based on books and videos from YouTube and realized that the main thing in creating a delicious drink is the enthusiasm and inspiration of the brewer. 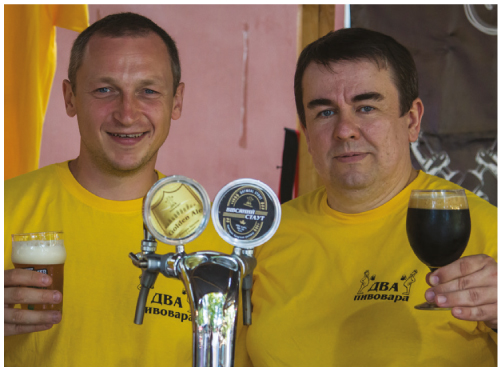 Later, the owners of the brewery mastered beer science at the Brewery School in Kyiv, learned from the best Ukrainian and foreign brewers, beer tasters. They installed the brewing equipment of the Ukrainian producer “Termo-Pub” for brewing beer per 1 ton, received a production license, purchased the necessary raw materials and started brewing their own beer, which was sold in the brand store.
During its existence, Dva pyvovara Brewery has significantly expanded its range of beers. Currently, 8 permanent beers are brewed here, as well as fans are delighted with novelties that are bottled in a glass bottle. The maximum production of beer is 8 tons per month.
Serhii SHEVTCOV, owner of Dva Pyvovara  Brewery

“Dva Pyvovara” is a small family brewery, which uses only manual labor, so you need to brew beer at least two. So the name of the brewery was found by itself.
We strive to meet the needs of the consumer, so we brew “clear” classic beer. At the same time, we give the city residents the opportunity to taste beer brewed according to international recipes and customs.

You can buy beer brewery “Dva Pyvovara” in a branded store in Odessa.