BEER.INSIDE SEVEN BEER
A few years ago, the founders of the brewery and old friends Stanislav Marchenko,  Oleksandr Alekseev and Yevhen Furnika were on vacation fishing. Then they drank bottled beer from the mass market and thought: why not make your own delicious drink. 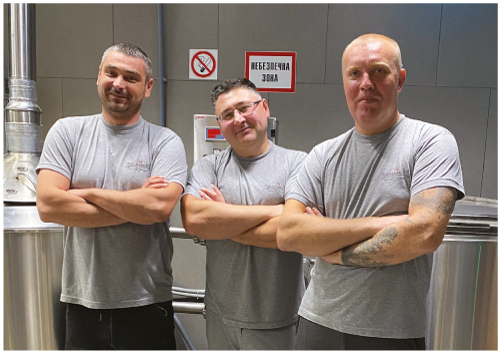 Stanislav, like many colleagues, had no specialized education, and the path of a brewer began with home brewing. At first he was engaged in self-education, and then decided to learn from professional brewers. Stanislav Marchenko received a beer education, graduated from the intensive care unit «Innovative technologies of fermentation technologies» on the basis of the National University of Life and Environmental Sciences of Ukraine. This year, the founder of the brewery Seven Beer received the qualification of «master brewer». Friends also gladly helped to establish a joint craft: Oleksandr solved licensing issues, and Yevhen started looking for investments.

The co-founders began their work on setting up their own production by finding a suitable premises. The SEVEN BEER brewery is located in the «Seven Sky» residential complex. Actually, this is where the idea of the name of the brewery came from. Subsequently, the brewers purchased equipment from a domestic manufacturer, installed a 500-liter cooking order, 6 CCTs for 400 liters, and later added another 5 for 900 liters. All equipment was arranged by hand.

– First of all, we set a goal – to show the average consumer what a real quality, but at the same time affordable beer. From the process of creating a beer recipe, fermenting the drink to registering your own brewery – everything had to go through my own experience. We try to disprove the most common myths about beer, so the process of brewing beer is in front of consumers.

The first beer SEVEN BEER was the Belgian ale «7 sky». This light refreshing drink has become a favorite among consumers and is still included in top five. Currently, the range of breweries 7-8 permanent varieties, including: Ale, IPA, APA, Pale Ale, Blanche. Brewers are also impressive connoisseurs of their drink with interesting experiments, such as fruit beer (strawberry and currant beer) or honey beer «Viennese Honey».