Tasting contest EAST EUROPEAN BEER AWARD 2020 Brewing in Ukraine
13.03.202010.06.2020 Дарина Дубинка
East European Beer Award 2020
Craft Community undoubtedly moves Ukraine to the gaining of the status of a beer country, which has been shown annually during the only international and independent beer competition East European Beer Award in Ukraine. Thus, the 4th Tasting Beer Competition took place on March 11-12, in the city of Rivne, and this time event has brought together 85 breweries from all over Ukraine and other countries such as Belarus, Great Britain, Germany, and Austria. Brewers submitted 331 beer samples in 20 categories for testing and evaluation. And, 95 beer judges were able to evaluate the quality of the beer samples in terms of the appropriation to the declared category. Thus, 32 breweries- participators have taken gold, silver and bronze medals in various categories.

The East European Beer Award 2020 was hosted by the hotel and restaurant complex Aivengo. It should be noted that the IV Tasting Competition impressed participants with its growth rates, level of organization and judges’ qualifications.

Yuriy Semenov, one of the co-organizers of the tasting competition, made the following comments “The tasting competition has been conducted great. We always roughly calculate how much time the tasters will spend on samples evaluation and how it will take for the team in processing of the results. And it turned out that this time all the procedures have been conducted faster. It shows that the level of tasters increases, because they are quicker in making decisions, and the level of the internal organization of the competition increases as well. This year’s competition has brought together more breweries and 20 categories. However, according to the Regulations, we had to unite two categories into one, which did not get enough samples – at least 7.  At the same time, there were categories with a great number of beer samples, in particular, Pale Lager with 48 samples, IRA – 29 samples, Weizenbier and Belgian strong ale with 23 samples in each category.  For the first time, we have decided to divide the cider into two categories – dry and sweet, with the aim of a better understanding of tasters and consumers how these beverages are different. The final of the tastings was judged by 40 judges at once, so the evaluation came out quite accurate and relevant”.

The participants of the East European Beer Award take part not only for the sake of awards but also for the sake of gaining experience, for market analytics and own product range. In the same way, distributors choose beer from a new range to find out where their sample is among the others on the market. Eventually, the Tasting Competition East European Beer Award is not only a professional industry competition, but it provides a large-scale consumer evaluation.

An independent Observer of the competition was IP and Law Firm “Pakharenko & Partners” that guaranteed qualitative and independent results and was responsible for the transparency of mechanisms. A team of beer referees was responsible for the accuracy and honesty of the tasting competition, headed by Roman MUKOID, associate professor of the Department of Technology of Fermentation and Winemaking, Candidate of Technical Sciences.

Moreover, Roman MUKOID noted the following “There are no international tasting competitions in Ukraine of such level as the East European Beer Award. I should admit the successful methodology of evaluation for beer samples. The whole working process from the sample encryption at the first stage to the final step was done very seriously and thoroughly. It means that everything is encrypted, mathematically calculated. One beer sample must be tested at several stages by 10 to 30 tasters, which gives a fairly objective assessment overall. After two days of tasting, I came up to the conclusion that none of the judges and participants have no idea where was their beer sample, even brewers,  participated as judges, couldn’t recognize their samples. It should be noted that there were many beer producers among the judges, that is a good idea because they need to know what the aroma and taste should be presented. Moreover, it‘s important to know the consumer’s wishes and needs. And the East European Beer Award gives this opportunity to everyone”.

It should be noted, the results of the tasting competition are open, and the results and points of finalists will be announced on our official website very soon. Among the winners in each declared category, there were not only Ukrainian breweries but Belgian, Dutch, Lithuanian, Belarusian and Czech beer producers. Moreover, the beer samples from the UK, Germany, and Austria have been introduced as well, although our customers liked more domestic producers in several categories.

An author of the idea of ​​the competition, founder of the media group “Technologies and Innovations”,  Kateryna KONEVA emphasized that our International tasting competition East European Beer Award 2020 impresses with its growth in development. Without exaggeration, the path that our German or Czech colleagues, the organizers of similar competitions, have overcome for decades, we go through several years. We should admit that craft brewing is gaining popularity in Ukraine very quickly. As a result, we see the quick-growing competition with the struggle for the highest quality. Two teams – the media group Technologies and Innovations and the Kyiv Beer League attach as much effort as possible for popularization craft beer, and the development of the consumption culture, as a consequence, we see the rise of the technological level of breweries. Here is the result!

We are glad to congratulate all winners of the East European Beer Award 2020:

The International Tasting Competition East European Beer Award 2018 Will Be Held on 9 October in Kharkiv: The Brewers Are Already Starting to Brew Their Best Beer!

14.02.2018 Дарина Дубинка Comments Off on The International Tasting Competition East European Beer Award 2018 Will Be Held on 9 October in Kharkiv: The Brewers Are Already Starting to Brew Their Best Beer! 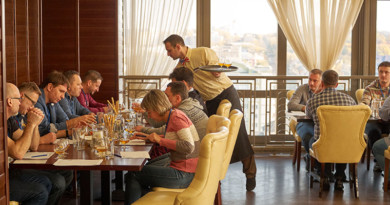